Information for kids to learn about the Earth. Earth is home to plants, animals and humans. Earth is the third closest planet to the Sun and the fifth largest planet in the Solar System.

Earth is the planet that we all live on! It was formed about 4.5 billion years ago and is home to plants, animals and humans. It is the third closest planet to the Sun and the fifth largest planet in the Solar System.

Earth is the only place where life is known to be found. 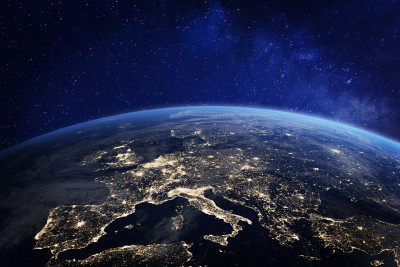 It takes the Earth 365 days to circle around the Sun. That is why one year is 365 days long.

Most of Earth's surface is covered in water, which is very important for living things such as humans, animals and plants. The Earth contains five oceans. The Pacific ocean is the largest ocean on Earth.

An atmosphere (air) is the layer of gas that surrounds a planet. It is very important for keeping us alive. The Earth's atmosphere has oxygen that we need to breathe.

Earth is the only planet that has one moon. Earth doesn't have any rings.

Upgrade Now
Remind Me later
No Thanks
You can revert your account back at anytime.
Earth
Level 2 Completed
50atoms Earned
Well done! you have earned 50 credits
Earth
Well Done!
You’ve finished this activity and scored:
60%
Receive 50 credits to purchase Hero avatars by completing the remaining 4 question you you answered incorrectly.