Interesting facts and information about the red planet Mars.

Mars is the fourth planet from the Sun and the second smallest. It is named after the Roman god of war. The surface of Mars is covered with red dust and rocks. Mars appears to be the colour red when viewed from Earth which is why it is called the Red Planet. It is very cold on Mars. 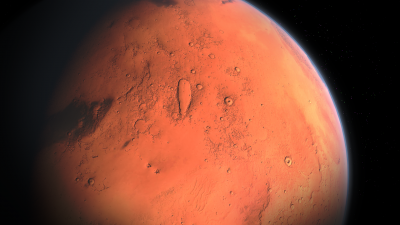 Mars is one of most similar planets to Earth in the Solar System. The planet shows signs that it had liquid water and a similar atmosphere to Earth. The atmosphere is the layer of gas around a planet.

- There are no rings around Mars.

- It takes 687 days for Mars to travel around the Sun.

- We can see Mars from Earth without using a telescope.

- Mars doesn't have any oceans.

Upgrade Now
Remind Me later
No Thanks
You can revert your account back at anytime.
Mars
Level 1 Completed
50atoms Earned
Well done! you have earned 50 credits
Mars
Well Done!
You’ve finished this activity and scored:
60%
Receive 50 credits to purchase Hero avatars by completing the remaining 4 question you you answered incorrectly.