Learn about some popular Greek buildings and how to spot the three types of columns they used.

The Ancient Greeks are known for their buildings. Many of them are still standing, even though they were built thousands of years ago. 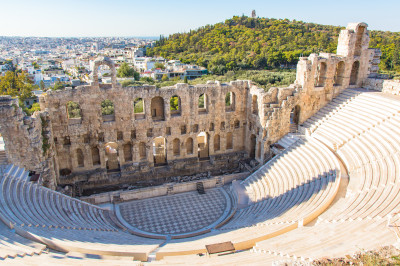 The Greeks liked to build in a certain way, following an order. They had rules on how to build. One of the easiest ways to spot a Greek building is by looking at the columns.

They had 3 styles of building columns which they called orders.

Some of the columns were plain and some were very fancy. The design on the top of the column was called the capital.

Doric: these were the simplest columns. They had no base and were wider on the bottom than the top. They were plain with no decorations.

Ionic: these columns were thinner than Doric columns. They had a base and the capital was decorated with scrolls on each side.

Corinthian: the most decorated of all columns. The capital was decorated with leaves and flowers of the acanthus plant. 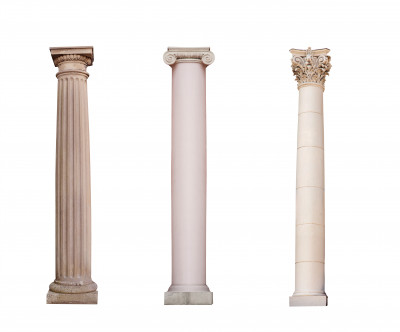 The Greeks built many different buildings. Their houses were usually made with white stone, flat roofs and had courtyards in the centre. Here are some other popular buildings:

Temples: were built to worship the gods. They were built with tall columns surrounding them and on the inside, they housed statues of the gods. One of the most famous temples is the Parthenon which was built for the Goddess Athena.

Have a look at the picture, can you recognise what types of columns were used to build the Parthenon? 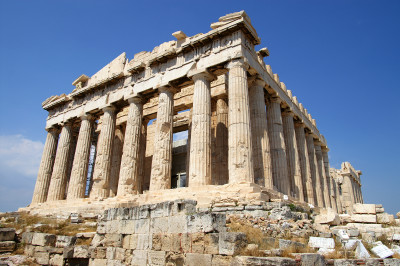 The columns are very simple, they are Doric columns.

Theatres: the Greeks loved plays and performances. They often built theatres on hillsides where people could sit along the hills and watch. Some theatres could seat thousands of people.

Assembly Hall: similar to a theatre but smaller. These were used for important meetings.

Stoas: were very long buildings built for markets and walkways. Sometimes they had two or three floors. 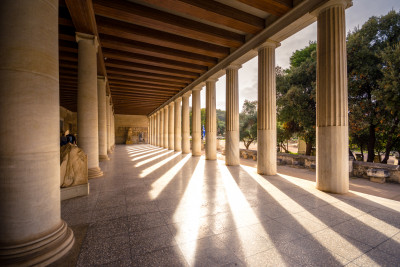 Gymnasia: used for wrestling and training warriors and athletes. Some parts were open and had running tracks and other parts were closed and used for lecture halls. Gymnasiums used in schools today originated from the Greeks.

Upgrade Now
Remind Me later
No Thanks
You can revert your account back at anytime.
Ancient Greek Architecture
Level 1 Completed
50atoms Earned
Well done! you have earned 50 credits
Ancient Greek Architecture
Well Done!
You’ve finished this activity and scored:
60%
Receive 50 credits to purchase Hero avatars by completing the remaining 4 question you you answered incorrectly.