Interesting facts for kids about where the ancient Olympics were held and how it was a religious celebration.

Interesting facts for kids about the modern Olympics, Olympic sports, and the Olympic torch.

Where were the ancient Olympics held?
The first Olympic games were held in Olympia in Greece in 776 BC. The games were held every four years in honour of Zeus, the king of the Greek gods. Around 50,000 people came from all over Greece to watch and take part. 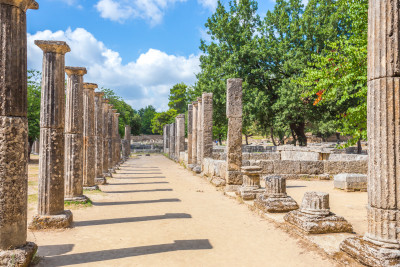 A religious celebration
The ancient Olympics were a religious celebration as well as a sporting event. For the first 13 Olympics, there was only one event. It was called the stadion race which was a test of speed, covering the Olympia track from one end to the other (200m foot race). Years later boxing, wrestling and the pankration were introduced, along with the pentathlon and horse and chariot racing.

At the very first games, there were no gold, silver or bronze medals. A wreath of olive leaves was given to the winners to wear on their heads. Each athlete competed on his own.

In modern-day Olympics world records can be won by running the fastest time, throwing a javelin the furthest or jumping the longest distance. In ancient Olympics, there was no such thing as a world record.

Upgrade Now
Remind Me later
No Thanks
You can revert your account back at anytime.
Ancient Olympic Games
Level 2 Completed
50atoms Earned
Well done! you have earned 50 credits
Ancient Olympic Games
Well Done!
You’ve finished this activity and scored:
60%
Receive 50 credits to purchase Hero avatars by completing the remaining 4 question you you answered incorrectly.