Come and discover the biggest dinosaur ever known to man, the enormous Brachiosaurus. Brachiosaurus was a friendly giant. It only ate plants and had a very small brain. Find out all about it.

Brachiosaurus was a gigantic dinosaur from the Jurassic Period. It lived around 156 million years ago.

Just like Diplodocus, Brachiosaurus was a sauropod. Sauropods were a group of dinosaurs with long necks and tails, small heads and thick pillar-like legs.

Brachiosaurus was about 82 feet (25 m) long and could reach 42 ft (13 m) tall, making it one of the biggest dinosaurs ever known. That’s bigger than two double-decker buses stacked on top of each other! 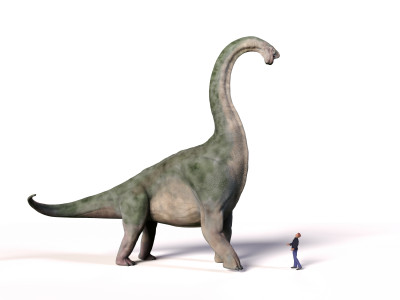 What makes Brachiosaurus so different to other dinosaurs is that its front legs were longer than its back legs. Most dinosaurs had longer back legs than front legs. It walked on all four legs and had five toes on each foot.

It had a small head with nostrils on the top, kind of strange, right? Scientists are still trying to figure that one out! Its small head contained an even smaller brain. Scientists believe it wasn’t very intelligent.

Brachiosaurus was a herbivore (plant-eater), it fed on foliage high above the ground thanks to its long neck. Its mouth was filled with 52 spoon-shaped teeth, very different from the peg-shaped teeth of most sauropods. 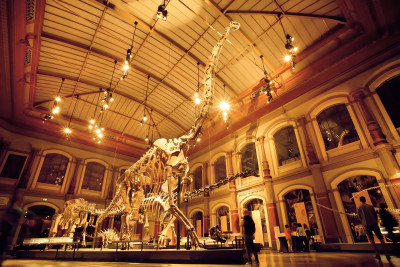 Scientists are still wondering how it held up its head. When the head is so high up, the heart has to pump really hard to send blood all the way up the neck to reach it. Brachiosaurus must have had a really strong heart to do this!

Scientists think they may have travelled in herds and laid eggs as they walked, rather than using nests. It appears they didn’t look after their babies, but this didn’t stop them from reaching over 100 years old!