The ancient Egyptians believed that when a person died, they would return to an afterlife. They thought that the body needed to be preserved so that the person could return.

When an important ancient Egyptian died and was mummified, they took all their major organs out of their bodies. These organs were the liver, intestines, lungs and stomach. They were put in 4 canopic jars for protection. The canopic jars had different lids with animal or human head shapes on them. The heart was left in the body and not placed in a jar. 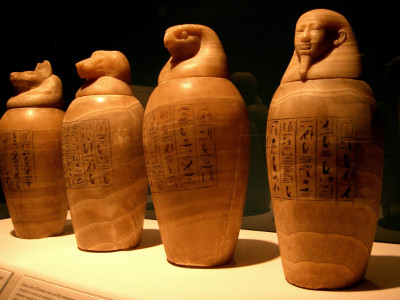 Each canopic jar was made to honour the four sons of Horus.

Imsety had the head of a human and protected the liver.

Qebehsenuef had the head of a falcon and protected the intestines.

Hapi had the head of a baboon and protected the lungs.

Duamutef had the head of a jackal and protected the stomach.

The jars were placed in a special chest that were put into the tomb with the mummy. Canopic jars were usually made out of limestone.

Upgrade Now
Remind Me later
No Thanks
You can revert your account back at anytime.
Canopic Jars
Level 1 Completed
50atoms Earned
Well done! you have earned 50 credits
Canopic Jars
Well Done!
You’ve finished this activity and scored:
60%
Receive 50 credits to purchase Hero avatars by completing the remaining 4 question you you answered incorrectly.