Learn some simple facts about the water cycle and the main difference between evaporation and condensation.

Learn more about condensation and how clouds are formed. This level includes interesting facts like why it is colder the higher up we go and how fog develops.

What is the water cycle?

This is because the water on Earth is always the same, going in cycles around and around, changing into ice, snow, or water vapour. This is called the water cycle. 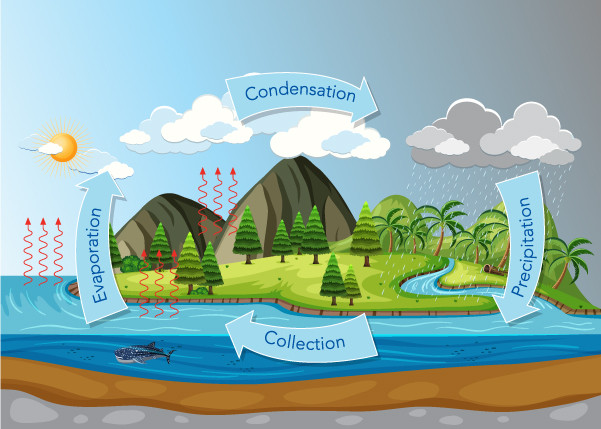 The liquid in the sky forms clouds and when the clouds are heavy the water falls from the sky. It can fall either as rain, snow, sleet, or hail. This is called precipitation. Now that the water is back on the ground, the Sun heats it up and the cycle starts all over again.

Liquids and gases can change from one state to another by heating or cooling. Heating can turn liquids into gas. This change of state is called evaporation.

Cooling can turn gas back into liquids, this is called condensation.