Learn some fun facts about this plant-eating dinosaur and why scientists are so confused about it.

Diplodocus was one of the longest dinosaurs to ever live. It lived during the Jurassic period around 155-145 million years ago.

It belonged to a group of dinosaurs called sauropods. Sauropods were huge plant-eating dinosaurs with long necks and tails and pillar-like legs.

Some Diplodocus measured 98ft (30m) long which is longer than a tennis court! Most of its length was taken up by its neck and tail. 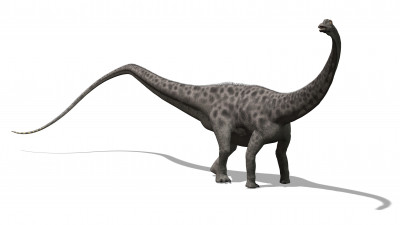 Its nostrils were located on top of its head. Because of this, scientists initially believed it might have lived underwater and breathed similar to dolphins. However, this was unlikely and most scientists today think it would have been impossible for it to breathe underwater because of its massive size.

Diplodocus walked on four legs with its feet forward like an elephant, not sideways like a lizard. Its front legs were shorter than its back legs and it had 5 fingers on its feet. It didn’t have claws except on the first finger of its back feet.

Diplodocus was a slow animal that travelled in herds. It laid eggs and was a herbivore (plant-eater). It had small, peg-like teeth in the front of its mouth. It probably swallowed small stones to help grind up the plants in its stomach. It replaced its teeth every 35 days. 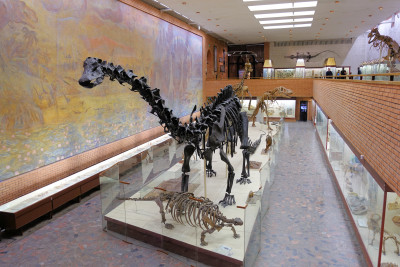 One of the strangest things about Diplodocus is that its neck was made up of 15 bones. Most animals today (even the giraffe) only have 7 neck bones. Many scientists believe that it couldn’t lift up its neck very high at all, but instead held it parallel to the ground and ate low-lying ferns.

Diplodocus had bones running along the underside of its tail, suggesting it might have used its tail as a weapon. Some scientists think that Diplodocus could stand up on its back legs to reach food from the treetops and that it used its tail as an extra leg to lean back on.

Upgrade Now
Remind Me later
No Thanks
You can revert your account back at anytime.
Diplodocus
Level 1 Completed
50atoms Earned
Well done! you have earned 50 credits
Diplodocus
Well Done!
You’ve finished this activity and scored:
60%
Receive 50 credits to purchase Hero avatars by completing the remaining 4 question you you answered incorrectly.