Kids learn some interesting facts about how Earth moves through space.

What is the Earth's orbit?

All the planets in the solar system orbit (or move around) the Sun. When planets orbit the Sun, they don’t move around in a perfect circle. They all follow an 'elliptical path', meaning it looks more like an oval.

The Earth’s orbit takes 365 days. This means it takes the Earth 365 days to completely go around the Sun. One year is the time it takes for the Earth to orbit the Sun.

While the Earth orbits the Sun, it is also spinning or rotating on its own axis. The axis is the invisible line that goes straight down the Earth from the North to the South pole. It takes 24 hours (one day) for the Earth to rotate on its axis. The Earth is never the same distance from the Sun. Sometimes it’s closer and sometimes it’s further away. 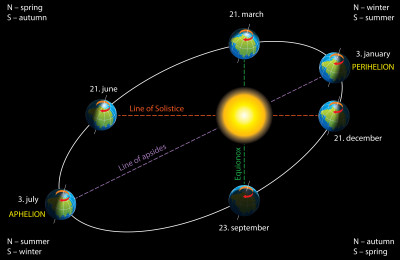 The Earth is always spinning on its axis and orbiting the Sun at the same time.

Upgrade Now
Remind Me later
No Thanks
You can revert your account back at anytime.
Earth's Orbit
Level 1 Completed
50atoms Earned
Well done! you have earned 50 credits
Earth's Orbit
Well Done!
You’ve finished this activity and scored:
60%
Receive 50 credits to purchase Hero avatars by completing the remaining 4 question you you answered incorrectly.