Eoraptor was a dinosaur from the Triassic period. Little is known about it. Did it have scales or feathers? Was it big or small? Let’s find out.

Eoraptor (meaning 'dawn thief') is another one of the early dinosaurs that lived during the Triassic period, around 228 million years ago.

It belonged to a group called Saurischians, or lizard-hipped dinosaurs. Their hips were similar to that of the modern lizards.

Eoraptor was a small dinosaur, about 3ft long (1m), and weighed around 22 pounds (10kg). It had a thin body with a long tail and a long head full of teeth. 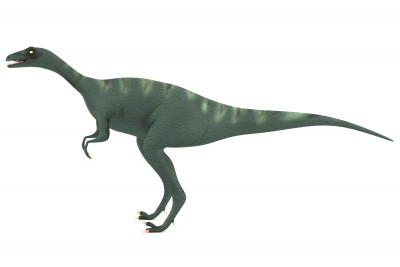 Scientists aren’t really sure if it had scales or feathers. They know it walked on two legs and they believe it was an omnivore, meaning it ate everything. Some of its teeth were long and sharp for cutting meat and some of its teeth were blunt and leaf-shaped for grinding plants.

Its front legs had 5 fingers with claws on three of its fingers. The other two fingers were very small.

Upgrade Now
Remind Me later
No Thanks
You can revert your account back at anytime.
Eoraptor
Level 1 Completed
50atoms Earned
Well done! you have earned 50 credits
Eoraptor
Well Done!
You’ve finished this activity and scored:
60%
Receive 50 credits to purchase Hero avatars by completing the remaining 4 question you you answered incorrectly.