Kids learn to identify the Roman numerals up to 10.

Kids learn how the Romans used capital letters for their numerical system and two important rules to remember when learning Roman numerals.

Roman numerals up to 10

What are Roman numerals?

The Ancient Romans were from Rome (Italy). They used Roman numerals as their numbering system. You can see them on clocks, after king’s names (King Henry VIII), and other places.

The Romans used capital letters for their numbers. Roman numbers are called numerals.

If you can remember the Roman numerals for 1, 5 and 10, then you will know all the numerals up to 10. 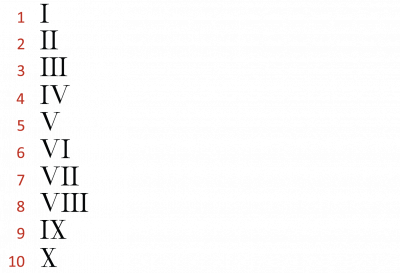 There are 2 important rules to know:

1. If you put a letter after a larger one it means you add it. Here is an example:

2. If you put a letter before a larger one it means you take it away. Here is an example:

Upgrade Now
Remind Me later
No Thanks
You can revert your account back at anytime.
Roman numerals up to 10
Level 3 Completed
50atoms Earned
Well done! you have earned 50 credits
Roman numerals up to 10
Well Done!
You’ve finished this activity and scored:
60%
Receive 50 credits to purchase Hero avatars by completing the remaining 4 question you you answered incorrectly.