Interesting Facts about the Vikings, including where they came from, where they settled, who they attacked and more!

Interesting facts and information about Viking longhouses and how the Vikings fought their battles.

Who were the Vikings?

The Vikings came from the lands we now call Norway, Sweden and Denmark. The Vikings were 'Norsemen' which means men of the North. Norsemen who travelled by sea on raids were called Vikings. They travelled across the seas in ships called longships, trading goods to buy silver, silks, spices, jewellery, and pottery to bring back to their homes. When a wealthy Viking died, he or she was placed inside a ship before burial. 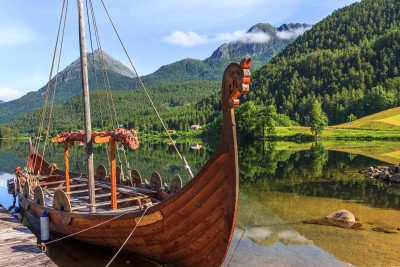 In AD 787 the Vikings took three longships and sailed to southern England. The Vikings attacked the local people and stole from their churches. They also burnt buildings to the ground. The Viking invaders were known as 'Danes' by the English, but they came from Norway as well as Denmark.

Why did Vikings attack monasteries?

Monasteries and priories were places where monks lived and worshipped. Many of these were raided by the Vikings. They were easy places to attack because the monks had no weapons. Valuable treasures such as gold, jewels, and books were kept in churches and monasteries.

Later on, the Vikings settled in Britain in a place called Danelaw. Historians believe that it was because Britain had a warmer climate and fertile land, which was perfect for growing crops.