Learn more fun facts about the ancient Egyptian people and culture. Discover what their homes looked like, why they kept pet cats and which of their inventions we still use today.

Learn how the ancient Egyptians built their boats from small rafts made of papyrus to giant wooden boats for transporting goods. Did you know boats were found in the tombs of pharaohs and rich people? Come and find out why.

Where did the ancient Egyptians live?

The ancient Egyptians lived along the banks of the River Nile in Egypt. The Nile was very important to the people of Egypt. They used it for water, food and transport.

Egyptian people lived in small mud houses with few windows or furniture. The houses had flat roofs that people would sleep on when it was too hot inside. 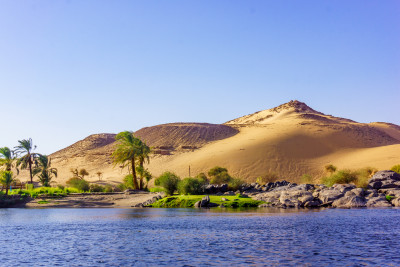 What did the ancient Egyptians eat?

The staple food for Egyptians was bread. They also ate fruits, vegetables, and lamb. Food was cooked in a clay oven and dishes were made out of clay.

Most ancient Egyptians worked as farmers. They also worked as craftsmen and scribes. Farmers grew barley, and vegetables such as onions and cucumbers. Craftsmen jobs included carpenters, jewellers, and weavers. Scribes were people who could read and write. They used reed brushes dipped in ink to write letters and draw pictures. What did ancient Egyptians wear?

Most people wore white clothes made out of linen. Women wore white dresses and men wore kilts to keep cool. Both men and women wore makeup and jewellery. Makeup wasn’t only for fashion, it also helped protect their skin from the hot sun. The Egyptians were usually barefoot, but sandals made from leather were worn on special occasions.

Upgrade Now
Remind Me later
No Thanks
You can revert your account back at anytime.
Introduction to Ancient Egypt
Level 3 Completed
50atoms Earned
Well done! you have earned 50 credits
Introduction to Ancient Egypt
Well Done!
You’ve finished this activity and scored:
60%
Receive 50 credits to purchase Hero avatars by completing the remaining 4 question you you answered incorrectly.